ONCE DELIVERED TO THE SAINTS

"Shock & Awe" in the KJV-Only Camp

Is Gail Riplinger just dabbling in Kabbalah or is she a “Christian Kabbalist” whose hidden agenda is to introduce Christians to the occult methods used by Jewish Kabbalists to interpret Scripture?  Or is Mrs. Riplinger a crypto-Jew, functioning as a secret “Jewish Kabbalist” in the Christian community?  Riplinger's maiden name is Ludwig, which in Latin is Clovis, the first Merovingian Jewish king:

“From the Germanic name Chlodovech meaning ‘famous battle’, composed of the elements hlud ‘famous’ and wig ‘war, battle’. This was the name of three Merovingian kings of the Franks (though their names are usually spelled in the Latinized form Clovis) as well as several Carolingian kings and Holy Roman emperors (names often spelled in the French form Louis).” 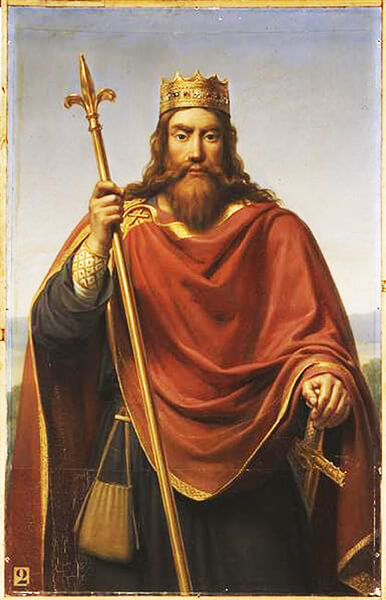 Clovis (Ludwig), King of the Franks

Since Gail's maiden name is one of high ranking Merovingian Jewish royalty, we might expect to find Merovingian Jewish symbols and concepts in her book. In fact, there are many Rosicrucian, Templar and Masonic symbols, motifs and code words subtly incorporated throughout In Awe of Thy Word.

The examples in the following pages are representative of numerous others in the book. Most of the Rosicrcian symbols are cryptically embedded in the text and artwork of In Awe of Thy Word. Displaying some of these symbols will hopefully make Gail Riplinger’s readers aware of her modus operandi.  Occult symbols from various other sources have been included for comparison purposes.

“And have no fellowship with the unfruitful works of darkness, but rather reprove them.”  Eph. 5:11

AS ABOVE, SO BELOW

As shown in Chapter 1, many pages of In Awe of Thy Word have the text aligned in the shape of the Holy Grail.  The “G” and “Z” pages of the appendix, “THE KJV’s ABCs,” show the text configured as a Grail:

The “Z” page emphasizes “Zion,” which the Grail bloodline is taking over through military means in order to enthrone their False Messiah in a rebuilt Temple of Solomon:

“...‘Z’...has the active, pointed confrontational face, seen on zealots like Zelotes. ‘Zeal’ pictures the busy zigzag sense of ‘z.’ In Hebrew, the letter Zayin which looks like a club or hatchet and also means ‘weapon.’ This is carried into Zion which means ‘fortress’; Zebah which means ‘slaughter’; Zabbai pictures its ‘roving about’ zigzag nature.” (Awe, p. 1153)

Looking at the shape of the letter ‘G’ caused Gail to see God there:

“Gg  The visually Grand, Great, and Gigantic letter ‘G’ frequently communicates what its size implies, and that is, greatness and grandeur....

Visualizing God in the shapes and profiles of letters also borders on Margaret Magnus’ Kabbalistic concept that gods indwell the letters, which may explain why God forbade His people from even thinking about Him in terms of the shape of any thing:

“Forasmuch then as we are the offspring of God, we ought not to think that the Godhead is like unto gold, or silver, or stone, graven by art and man’s device.” (Acts 17:29)

“In its original form the letter G was held to be sacred by the Pythagoreans; it was the initial letter of the Earth Goddess Ge or Gaia in whose honour the Eleusinian mysteries were celebrated;...” (“The Letter G” )

MORE HOLY GRAILS IN AWE OF THY WORD

What is the ‘Holy Grail’?

A red “English Rose” is displayed under a Grail or inverted triangle which references the Song of Solomon 2:1 – “I am the rose of Sharon...” with reference to the King James Bible along with the statement: “Tyndale and Coverdale saw the opening of the petals of the prize English Rose.”

The “Red Rose” is a cryptic reference to the Order of the Rosy Cross and the Merovingian/Dragon/Serpent Bloodline.

Is Gail stealthily conveying the idea that the KJV is a Rosicrucian Bible?

The opening pages of Gail’s book introduce a “The Scarlet Line” of Bibles wherein are veiled “mysteries” and the “deep and secret things” which will be “unveiled” to the reader through “computational linguistics” as interpreted by various Kabbalists.  Riplinger’s “word-for-word and letter by letter collation of ancient and early Bibles” (many out of the corrupt Alexandrian stream) reveal the “untold, underground hidden history of the Bible” (which means there is no historical evidence for her claims).

“This is the first book to unveil treasures in the word of God, using tools from the new field of computational linguistics…

“This book is the first and only history of the Holy Bible based on a word-for-word and letter by letter collation of ancient and early Bibles…This is the untold, underground hidden history of the Bible, written, not by this author, but by the Bibles, their translators, and the martyrs themselves – Christians who died rather than corrupt one word… A history of the Bible must come from the Bible itself.” (pp. 6, 7, emphasis in original)

“THE SCARLET LINE” OF BIBLES

“The charts bound in this book are windows to the past. Like Rahab, they ‘bound the scarlet line in the window’ to show the people of God the safe haven (Joshua 2:18,21) The charts’ scarlet line of letters, like our Saviour’s life-preserving blood, binds the words of each successive Bible from the most ancient to the King James… Wycliffe said that to peel a thread from any word is to begin unraveling the entire holy garment of Scripture (On the Truth, p. 2)...

A sewn-in scarlet red satin ribbon page marker along with red highlighting throughout In Awe of Thy Word reinforces the scarlet thread theme. 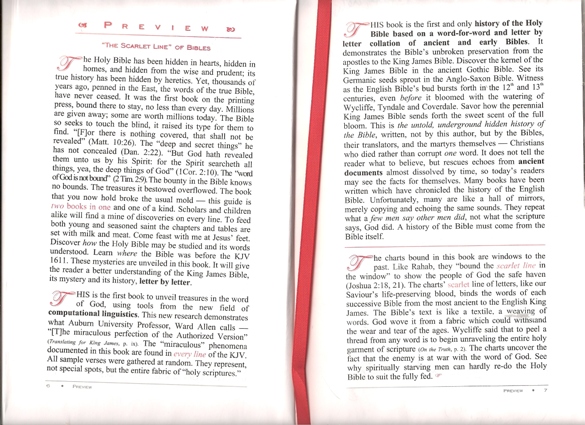 In the third Rosicrucian Manifesto, The Chymical Wedding of Christian Rosencreutz, Christian Rosencreutz, tied a “Blood-red Ribbon bound-cross-ways over my Shoulder” – a red ribbon in the form of a cross – in preparation for the Sacred Marriage rite.  The terms “alchemical wedding” and “sacred marriage” signified the union of Protestantism and Hermeticism, which will be the end result of Gail Riplinger’s Kabbalistic teachings in the King James Only community, hence the blood-red ribbon and scarlet thread motif throughout her book.

Gail identifies the scarlet line with Rahab, the harlot in Joshua 6, and associates the line of scarlet thread with ‘our Saviour’s life-preserving blood.’ However, a scarlet thread also appears in Genesis as a competing lineage for the messianic birthright. Chapter 38 gives the account of the birth of twins to Tamar, Er’s widow, who was impregnated by her father-in-law, Judah:

“And it came to pass in the time of her travail, that, behold, twins were in her womb. And it came to pass, when she travailed, that the one put out his hand: and the midwife took and bound upon his hand a scarlet thread, saying, This came out first. And it came to pass, as he drew back his hand, that, behold, his brother came out: and she said, How hast thou broken forth? this breach be upon thee: therefore his name was called Pharez. And afterward came out his brother, that had the scarlet thread upon his hand: and his name was called Zarah.” (Gen. 38:24-30)

As a matter of fact, the Merovingian tribe of Dan, which claims to have descended from Dardanus, the founder of Troy, whose father was Zarah, claims the messianic birthright from Judah through Zarah on whose hand the scarlet thread was bound.

“Dardanus Founder of Troy, son of Zarah, Proginator of the Zerahites and Electra, of the Pleiades, was born in Eygpt and from Crete, Greece, Samothrace in the Aegean and died in 1449 B.C. in Dardania at the foot of Mount Ida.” (Ancestors of: Dardanus, Founder of Troy)

“The key to making the amazing Red String Bendel work is to transfer part of your own energy to the red string - transfer the feeling that you can ward off evil. The string is the talisman to make it happen. The Red String Bendel is as powerful as the individual who wears it.”

The Kabbalah Center promotes this pagan amulet/talisman by identifying it with Jacob’s idolatrous wife, Rachel:

Rachel and The Red String

“The Red String has been used as a tool of protection for centuries. The practice, developed by the sages, involves winding the red string around the tomb of the great Matriarch, Rachel located in the Land of Israel. The string is then cut it into pieces and worn on the left wrist. The left hand is considered by Kabbalah to be the receiving side for the body and soul. By wearing The Red String on our left wrist, we can receive a vital connection to the protective energies surrounding the tomb of Rachel. It also allows us to take Rachels powerful protective energy with us and draw from it anytime.

“Kabbalists believe that by seeking the Light of holy persons, such as Rachel, we can use their powerful influence to assist us. According to Kabbalah, Rachel represents the physical world in which we live. Her greatest desire is to protect and defend all of her children from evil. When we tie The Red String to our left wrist, while reciting the powerful Ana BeCoach prayer on this card, we seal her powerful protective energy within as it intercepts negative influences intended to cause us harm.”

The Kabbalah Center fails to inform their victims that Rachel’s pagan idols brought a curse upon her:

“And Laban went to shear his sheep: and Rachel had stolen the images that were her fathers…

“And Jacob answered and said to Laban, Because I was afraid: for I said, Peradventure thou wouldest take by force thy daughters from me. With whomsoever thou findest thy gods, let him not live: before our brethren discern thou what is thine with me, and take it to thee. For Jacob knew not that Rachel had stolen them. And Laban went into Jacobs tent, and into Leahs tent, and into the two maidservants tents; but he found them not. Then went he out of Leahs tent, and entered into Rachels tent. Now Rachel had taken the images, and put them in the camels furniture, and sat upon them. And Laban searched all the tent, but found them not. And she said to her father, Let it not displease my lord that I cannot rise up before thee; for the custom of women is upon me. And he searched, but found not the images…

In another instance of misappropriating a Biblical character to legitimize the Kabbalah, Madonna changed her name to “Esther” to reflect her conversion from Roman Catholicism to Jewish Kabbalism. In the Old Testament, Esther was the Jewish queen of Persia (modern Iran) whose intercession led to the royal decree authorizing the Jews to slaughter their enemies throughout the Medo-Persian Empire. The name “Esther” is an English transliteration of “Ishtar,” the Persian Mother Goddess worshipped by Jewish Kabbalists whose mystery religion was adopted by their Jewish ancestors during their captivity in ancient Babylon. The Jews who chose not to return with Nehemiah to Israel but remained in Babylon, which was later conquered by the Medes and Persians, would be the carriers of the Babylonian mystery religion back to Israel.

CONTEND FOR THE FAITH: