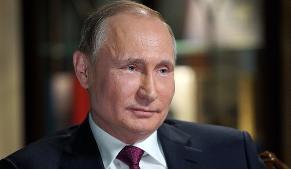 His other grandfather fought on the Russia-Austria front during World War I.

Russian President Vladimir Putin spoke out about his grandparents for the first time. He said that his paternal grandfather, Spiridon Putin, worked as a cook with Vladimir Lenin and then with Joseph Stalin at a dacha in the Moscow Region.

In the new documentary Putin by journalist Andrei Kondrashov, the president recalls what his father told him about those times. “When grandfather worked with Stalin, my father visited him and was even let into their house and could observe how they lived,” Putin said. After Stalin’s death, Spiridon Putin and his wife worked at a Communist Party rest house in Ilyinskoye, Moscow Region.

Vladimir Putin says it’s remarkable that they weren’t purged (like many of Stalin’s close circle). “They were probably valued for being trustworthy(!) people.” 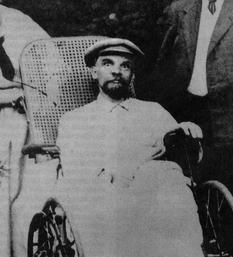 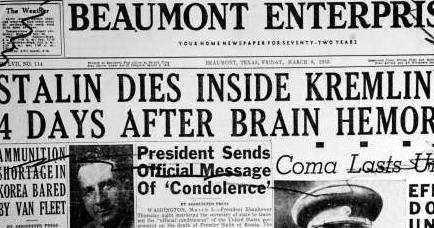 Reason: The Nineteenth Congress of the Communist Party met in Moscow in October 1952 after an interval of thirteen years.


"It was only towards the end of the congress that he made a short speech, addressed not so much to the Russian delegates as to the leaders of the foreign Communist parties assembled in the box for distinguished guests.

The events of 1949 in Leningrad marked a new stage in the anti-cosmopolitan campaigns, which persisted for another few years until Stalin finally died. Eventually, the victims of the anti-Semitic purges were rehabilitated, but this almost always occurred posthumously and in a perfunctory manner."

[Comment: The foreign communists ("cosmopolitans, parasites" as Stalin referred to them) took the position that the world government to come would take the form other than that which is the current proletariat dictatorship of present day (1952) Russia.  In other words, "Atheism" (aka Albert Pike) or Communism is but a temporary phase in the quest for world revolution.]

Translated:  Communism or Atheism is part of the dialectic process to bring about "Illuminati Hegemony" (as termed by Albert Pike).  Since that day (Stalin's death), international revolutionary forces have controlled Russia (i.e. by the same, China too).


China:  An example (one of many) of covert Illuminati support: Illegal transfer of technology(ies) which would enable the PLA to improve accuracy of it's ICBM.

"China agreed in November 2000 not to assist other countries in developing ballistic missiles that could deliver nuclear weapons. But the Central Intelligence Agency told Congress earlier this year that Chinese companies have continued to provide ''missile-related items, raw materials and/or assistance'' to North Korea and several other ''countries of proliferation concern."
https://www.nytimes.com/2003/03/06/world/2-companies-pay-penalties-for-improving-china-rockets.html North Korea:

Foreword "In 1782, Freemason William Barton had proposed a Phoenix in flames as the original Great Seal in America as a symbol of a renewed liberty. Eventually, the first design of the Great Seal of the United States would be attributed to Charles Thomson and was adopted immediately by Congress on June 20, 1782."

<--- Phoenix bird on a nest of flames

"In Greek mythology, a phoenix is a long-lived bird that cyclically regenerates or is otherwise born again. According to some sources, the phoenix dies in a show of flames and combustion, although there are other sources that claim that the legendary bird dies and simply decomposes before being born again. There are different traditions concerning the lifespan of the phoenix, but by most accounts the phoenix lived for 500 years before rebirth."  --  Wikipedia

"The first casuality in war is the truth." -- Winston Churchill 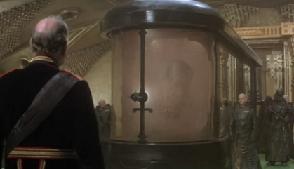 "We have just folded space from Ix...
You are transparent... I see many things...
I see plans within plans." 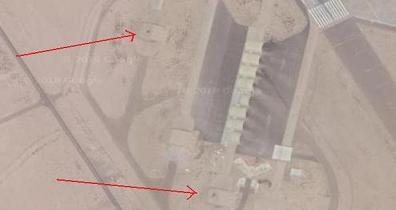 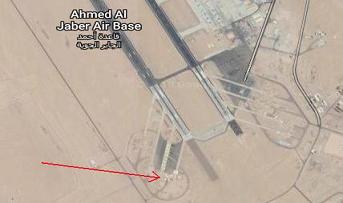 Meanwhile, the real Iraqi AFB shelters & base facilities are left unscathed ....in Iraq.

There are no USAF bases in Iraq today.  The permanent US military presence in Iraq is exclusively US army & marines (Ain Assad AF Base).  The bases are located on former Iraqi military (primarily AFBs) sites.  All Iraqi AFBs were undamaged from the Gulf Wars I & II, contrary to what was reported in the media. No coalition allied bombings were conducted against Iraqi AFBs during Desert Storm I & II!  This is demonstrated below at Balad AFB, the largest of the Iraqi AFBs. 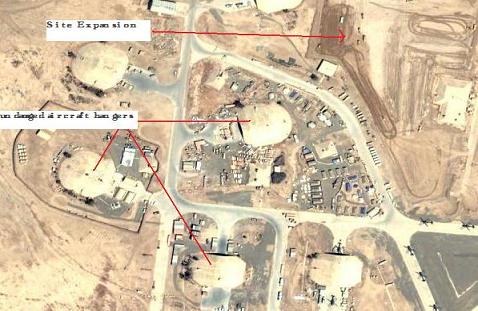 "Many machines on Ix... new machines.

Better than those on Richesse." 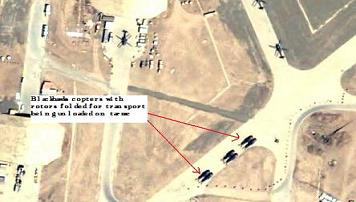 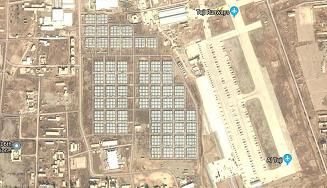 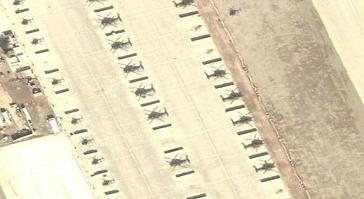 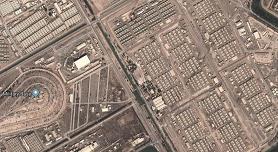 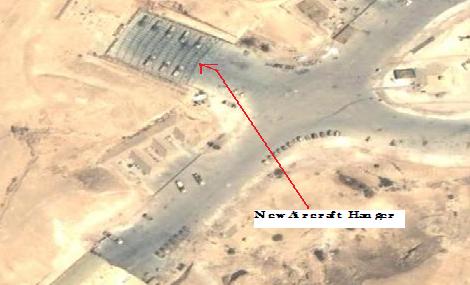 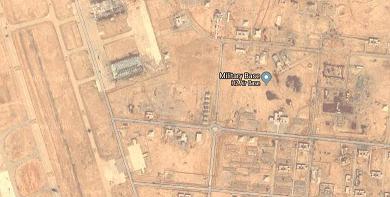 The US Army posture in Iraq suggests a significant airborne/air assault capability being deployed. In particular, helicopter borne infantry assault (e.g. 101st Airborne Div) force.  The US Army development of its infrastructure in Iraq is continuing, and so far there is an absence of heavy armour component to this buildup.  The character of this development suggests the US Army of the Euphrates anticipates future operation(s) to the west.


From the ashes of the Phoenix ... born again!

..... The United States Army of the Euphrates (Commander =

By destroying the USA (not all of USA will be destroyed though - why I will explain at another time), meaning the physical destruction will occur when her services are no longer needed by the Illuminati.  This is the reason why China and Russia's nuclear arms have been built up since the days of the Manhattan Project.  There is good reason to suspect WW3 or WW4 conflagration will be ignited by a "false flag" operation conducted by a 3rd party at the behest of the Illuminati.    Consider the following:

The AGM-129 ACM (Advanced Cruise Missile) is a low observable, subsonic, turbofan powered, air-launched cruise missile.  With it's external shape optimized for low observables characteristics, including forward swept wings and control surfaces, a flush air intake and a flat exhaust. These features, combined with radar-absorbing material result in a missile that is virtually impossible to detect on radar.  Under the terms of the SALT II agreement, nuclear tipped cruise missiles such as the AGM129s were to be decommissioned & disposed of (which they were, so a physical audit is now impossible!).
The Minot-Barksdale Incident

"In August 2007, at least six nuclear warheads were stolen from Minot Air Force Base in North Dakota. The moment they were loaded, they disappeared from America’s nuclear inventory, “location unknown,” something that is not supposed to happen. There is no possible “misinterpretation” of orders, no mistake, no “wrong label” issue. These weapons were stolen, pure and simple. Discussions of individual commanders having authority to deploy weapons, stories of accidents, confusion or political alignments within the Air Force are “red herrings.”

Nothing is more controlled, more secure, more restricted, more classified, more protected than the nuclear arsenal of the United States. However, on that fateful day in 2007, a half dozen or more, hydrogen bombs, were plucked out of a secure bunker with no paperwork, no orders, nothing.

This is the military. People are jailed for losing flashlight batteries.

They were loaded into the weapons bay of a B-52 long-range bomber for transport to places unknown, for purposes unknown. The plane had no orders, was part of no mission, operated under no legal command structure, in fact, the moment the weapons were loaded, was no longer an American plane at all. A mission, even under the most innocent possible circumstances, that would have required the knowledge of the President and his staff, certainly the Joint Chiefs of Staff and likely the National Security Council as well, seem to have authorized itself, out of “thin air.”

Though the plane later landed at Barksdale Air Force Base in Louisiana, there is no evidence supporting this as the intended destination, far from it.

Similarly, top defense consultant John Wheeler III, who knew of these issues quite well was mysteriously murdered and his body found in a garbage heap in Delaware in late 2010. No suspects have been arrested; no real investigation has ever been made."  -- Veterans Today

The Wikipedia article implies that the 6 nuclear tipped AGM129 cruise missiles were eventually found & accounted for after 36 hours. This is where the story gets very murky and the internet is full of differing accounts of what really happened & various conspiracies concerning possible "nuclear attack on Iran" with VP Dick Cheney's involvement.  No doubt these are all false trails put out by known disinformation agents such as Webster Tarpley, Wayne Madsen (WMR), and others.

It does appear that VP Dick Cheney setup a dual chain of command in the USAF hierarchy which allowed him & his cohorts to intervened in the normal custodial handling of nuclear weapons.  In addition to this, President George Bush Jr. made a visit to Minot AFB several months prior to the Barksdale Incident.  While at Minot AFB, President Bush personally greeted the B52 bomber crew(s).  Possibly this was to demonstrate and convince the selected B52 bomber crew(s) the "unusual order" which they were going to receive were genuine and that it came from the highest office in the land ... the White House and the President himself.

So what happened to these nuclear tipped stealth cruise missiles?

The 36 hours elapsed time is the clue to what may have happened.  Thirty-six hours was more than enough time it took a B52 bomber flying from Minot, ND to the eastern Mediterranean, unload the AGM129s, refueled and return to the USA a la Barksdale AFB!