Happy New Year From the LGBTQ ‘Rights’ Lobby aka HRC 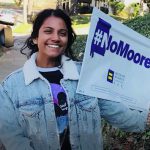 Living in Alabama has provided Christians and conservatives with a front row seat for the movements of the LGBTQ lobby. We saw Project One America launched by Human Rights Campaign in 2014 which lead to the formation and organization of HRC Alabama. This provided massive outside funding, staffing and training to focus on closing the deal on the LGBTQ package for Full Equality in the Heart of Dixie. Given Alabama’s long civil rights struggle, the effort has had a historic stage on which to play its public and political discourse.

All Politics are Local … Not Really

In the recent Roy Moore / GOP defeat (still in dispute from voter fraud allegations) in the State Senate special election, the local HRC leadership boasted of their role in securing the Democrat Doug Jones victory as the HRC and LGBTQ organizations had staffed his campaign. Here is that HRC quote on the extent of resources brought to the Jones campaign dated December 13th 2017.

“I don’t take the time to acknowledge the incredible work HRC does here in Alabama enough. But HRC had over 10 staffers working to elect Doug Jones here in Alabama. Coupled that with over 160 volunteers we logged over 580 hours of volunteer time for the campaign. Fellow board members flew in from Texas to help us on the ground, and steering committees from NYC, Atlanta, DC, and San Francisco logged hours in phone bank time for Doug Jones. HRC Alabama hosted over 20 volunteer events for the campaign. HRC partnered with Equality Alabama and others on all these efforts.

The point: Winning takes hard work, partnership, strategy and team work. Tonight it paid off. I am so grateful to all of you that volunteered, staff that came to help, and HRC family from all over the nation!”

The same LGBTQ lobby machinery on a smaller scale was used to elect a new Mayor, Randall Woodfin and unseat the City Council head in Birmingham, Alabama just a short time (October 4 2017) before. This is in spite of the fact that the previous Mayor William Bell was celebrated on the HRC blog in 2016 for rolling out the red carpet for a national HRC Board meeting in the city and, as an African American leader facilitated that welcome to include the piggybacking of LGBTQ equality on the Civil Rights history here. Bell’s city Council head Jonathan Austin (celebrated as well on the HRC 2017 victory blog ) had pushed through an LGBTQ antidiscrimination ordinance in the city just prior to the election guaranteeing protection in -access to public use- housing – and employment for LGBTQ in the city.

The ordinance includes intrusive limitations to the rights of Churches and religious organizations to allow access /use of their facilities and hiring of staff (with a narrow exception for those “performing a specific religious duty” ) to be done in keeping with the moral and spiritual convictions of the organizations faith. A Human Rights Commission paid for by taxpayers, and including members of HRC and paid activists, is being established to enforce the ordinance. Offenders will be brought before the tribunal /Commission and given a chance to recant of be recommended to the Municipal Court for trial and fines. Once more this is at taxpayers’ expense.

The Commission will then recommend the plaintiff to pro bono legal help for a Civil Court lawsuit. Birmingham residents have little knowledge of how their city is changing or of who is making it happen. Councilman Austin had introduced the ordinance in 2013 but was apparently too slow for the gay activists in getting it passed and failed in his reelection bid, as did Mayor Bell. Perhaps there is something to be learned from this HRC political betrayal for politicians everywhere. “What have you done for me lately?” appears to be the mantra of the LGBTQ rights lobby.

HRC has big local plans nationwide for your city, county and state.

The $27 million (likely double that by now) budget was announced mid 2017 for 2018’s expansion of the Project One America nationwide. The local focus is continuing past criteria of grading your leadership while sharpening its efforts methods and emphasis in these three areas:

“ANTI-BULLYING  Beginning next year, the School District Anti-Bullying Policies standard will be replaced with a new bonus criterion—City Services Youth Bullying Prevention Policies. This category will reward cities with a maximum of two points for implementing policies that prohibit bullying on the express basis of sexual orientation and gender identity in all youth-facing city facilities and services.”

“RELIGIOUS EXEMPTIONS  To reflect the true scope of the citywide nondiscrimination laws assessed in Part I of the MEI scorecard, the 2018 MEI will deduct points for nondiscrimination ordinances that allow discrimination through religious exemptions that single out sexual orientation and/ or gender identity. Cities will lose one point for each Part I criterion to which a religious carve-out that singles out the LGBTQ community applies.”

“NEW CRITERIA Finally, the 2018 MEI will add two new bonus criteria—Single Occupancy All-Gender Facilities and Laws Protecting Youth from Conversion Therapy—as well as reintroduce the City Employee Domestic Partner Benefits standard as bonus points. Starting in 2018, cities that require all single-user sex-segregated facilities within the city like bathrooms and changing rooms to be all-gender will receive two bonus points. Cities that designate all single-occupancy facilities within its own buildings as all gender will receive half credit. All residents deserve the dignity and safety of equal access to facilities in accordance with their gender identity. Additionally, cities that enact laws to protect youth from the harmful and discredited practice of so-called “conversion therapy” will garner two bonus points. Conversion therapy refers to any effort to change an individual’s sexual orientation or gender identity. It is based on the false notion that being LGBTQ is an illness that needs to be “cured.”

To be clear, your elected officials will be pressured to make your city compliant with ALL LGBTQ concepts of equality. This includes the “All Gender” bathroom access in all public restrooms, the abandonment of Reparative Therapy which, based on definitions from South Florida and other recent ordinances, will criminalize any non-affirming counsel on the part of church Pastors, School Counselors and even parents. Fines and punishment await those who dare tell a child that the LGBTQ lifestyle is harmful, sinful, or not recommended for healthy happy future. Perhaps the CDC should be indicted as well for its warnings on the health risk of LGBTQ.

In addition, Corporate America, which is under its own shakedown with the HRC Corporate Equality Index, is being used to apply pressure your local leadership. Gay lobby supporting corporation, Amazon.com, dangled a potential 60,000 new jobs before Birmingham residents and City Council in an announcement the same week as the local LGBTQ antidiscrimination ordinance vote came to the council room. HRC activists who spoke on behalf of their ordinance pointed to this “all important inclusive culture to attract corporations like Amazon to our city”.

No doubt 2018 is going to be an interesting year. Take a deep breath and consider doing something to “just say no” to the insanity – and the hijacking of your local representation.