IS REVOICE LGBT+ THRIVING THROUGH COVER UP IN PCA MISSOURI PRESBYTERY?

THE “INVESTIGATION” OF REVOICE IN THE PCA

It was obvious to most people in the PCA that Revoice Conference being hosted by/at Memorial Presbyterian (PCA) church in St Louis represented a major cause for concern within the conservative denomination. Also, the fact that over half a dozen of the speakers at Revoice were from its flagship Covenant Seminary in St Louis MO proved concerns were well-warranted.

Thankfully, faithful PCA ministers and elders from numerous regions began efforts to challenge the Revoice movement in their denomination through such actions as calls for discipline against the host church. This writer was privy to one effort in some detail. Due to multiple complaints, the Session of Elders at Memorial Presbyterian Church who hosted Revoice has asked the Missouri Presbytery to investigate and rule on the allegations against them.

HERE IS THE RECENT STATEMENT ON THAT INVESTIGATION

In October of this year the session of Memorial Presbyterian Church “referenced” Missouri Presbytery (BCO 31.2 & 4.1-4), asking the presbytery to investigate and rule on allegations against them and their Pastor regarding their hosting of the Revoice Conference in July. In response to Memorial’s request, the Moderator established an investigative committee chaired by TE Ron Lutjens to review all these concerns and present their recommendations to the presbytery in 2019. In addition to this, after the October meeting, Missouri Presbytery received a “Letter of Concern” from Calvary Presbytery (PCA) regarding the Revoice conference. The committee has also been tasked to look into the issues raised by that letter as well.

WHO IS INVESTIGATING REVOICE?

The sad truth is that the time invested in the efforts to bring some accountability to those in the PCA who helped incubate, promote and host Revoice Conference 2018 will likely not go very far.

The moderator for the Investigative Committee has appointed T E Ron Lutjens as chair of the investigative committee and to recommend their findings to the Presbytery.

Lutjens is not likely to be able to bring objectivity to the “investigation” in part due to his own ties to Revoice which lie just one layer below the surface. PCA brothers and sisters concerned about what is reflected by this event and the movement behind it in their denomination should call their faithful to weep and lament – not for the Sexual Minorities bemoaning themselves at Revoice – but for their once faithful denomination and its institutions.

As documented in links below, First Light Inc is a ministry to Same-Sex Attracted people in the Church. Its offices are at Revoice Host Church Memorial PCA, the church which is under investigation. Two of First Lights employees were Revoice speakers including Revoice VP, Stephen Moss. First Light’s Principle Officer listed with non-profit tracking organization GuideStar is Ron Lutjens

“Because the building is expansive, we house office space for ministries such as First Light—a ministry for sexual brokenness; ISI – an international student ministry; the Chapel – a venue for concerts, art openings, and theatre productions; four on-site professional counselors; and a weekly home schooling group in addition to other various ministries.”

“Since first sharing his story publicly in 2013, Stephen has spoken and written about his experience as a Christian who is gay and celibate. He’s a founding board member and VP of Operations for Revoice.”

Now it is also important to note that Covenant Seminary whose obvious “contribution “to the Revoice Conference of 2018 has caused enough concern that the President of Covenant was asked to address the issue at the June 2018 General Assembly in Atlanta. 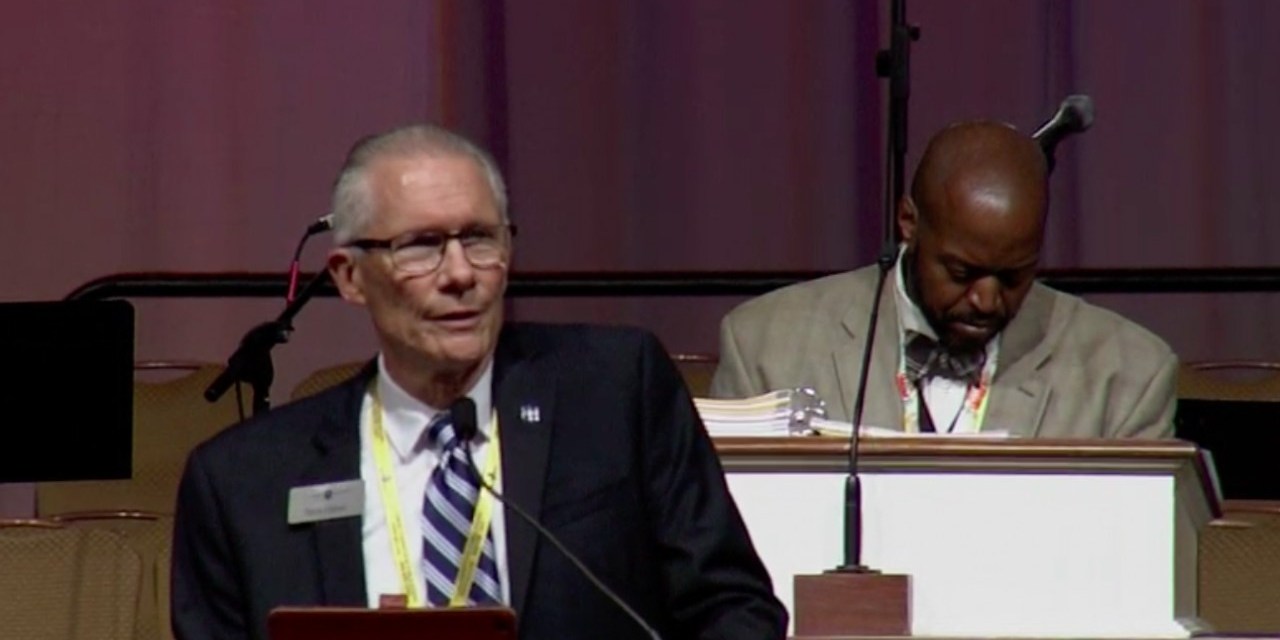 Last week the 2018 General Assembly of the Presbyterian Church in America gathered at the Hyatt Regency in Atlanta. As part of my duties as a commissioner, I sat on the Committee of Commissioners of Covenant Theological Seminary. My time in that committee has been summarized here. During our committee’s report on the floor of … Continue reading

One concern General Assembly attendees were not made aware of is that the Covenant Seminary President’s wife works with First Light as well.

“This breakout session of Ministry Leadership is for all MDiv wives and women students and meets separately from the men for two hours weekly during the semester.

The “investigation” makes for a tidy little in-house shop of horrors for anyone in the PCA who sees the threat of the Revoice movement. As Revoice brazenly boast its goals of “promoting LGBT+ flourishing” including “Queer Christians, LGBT+ Christians, Sexual Minorities” in the church and ministry, Churches “welcoming the LGBT+ Community” and becoming “Safe Spaces” in the churches, it also commits to dredging up the “unique treasures of Queer Culture, Queer literature and Queer Theory for the church and the New Jerusalem.” Arguably, nothing this unbiblical or beyond the bounds of Biblical or PCA orthodoxy in the history of the PCA has gained more sudden traction in the mainstream of the denomination or posed as deep a threat to its future.

SOUTHERN BAPTISTS ARE EQUALLY AS INFILTRATED & IMPACTED BY REVOICE, BUT NO ORGANIZED PUSHBACK HAS TAKEN SHAPE AS IT HAS IN THE PCA.

The only responses from the Southern Baptist Convention and the president of its SBTS Seminary, Albert Mohler, have been to skirt the greatest issue of concern for Southern Baptists. The founder of Revoice is a long-time student and former teacher (14 1/2 years in total) at the SBC flagship seminary which Dr. Mohler heads. His last effort to address the concerns of believers in the SBC came on August 2nd, 2018, just after the first Revoice conference in which Dr. Mohler finally mentions the founder — his student — by name but never connects him with SBTS. Mohler has also never commented about his disciple, Russell Moore, and the ERLC’s multiple close ties to Revoice’s promotion and speakers. No organized opposition exists in the SBC to the Revoice efforts for “Queering of the Church” and promoting “LGBT+ flourishing” in the SBC.

Given that the 2019 Revoice conference registration has already begun, the PCA and SBC folk who are awake, watching, and praying have little to look forward to on this front in the new year except to find a small bit of humor in watching their leaders exercise their poor skills in dancing the two step.

Perhaps soon the wake-up call will come to the PCA and SBC leaders who have provided cover for the Revoice movement, as weary believers, tired of the shell games and compromise, begin the mass exodus from what had been the remaining uncompromised denominations and leave these leaders to deal with the empty church buildings those members of the exodus helped to build. Perhaps the cost will be counted too late like others who have passed this way before. At this time, the stage four metastasized and leavened lump requires nothing short of a miracle to save these denominations from becoming the valley of dry bones. But nothing is impossible with God.

Matthew 19:
26 But Jesus looked at them and said to them, “With men this is impossible, but with God all things are possible.”

Ezekiel 37
1.The hand of the Lord came upon me and brought me out in the Spirit of the Lord, and set me down in the midst of the valley; and it was full of bones. 2 Then He caused me to pass by them all around, and behold, there were very many in the open valley; and indeed they were very dry. 3 And He said to me, “Son of man, can these bones live?”
So I answered, “O Lord God, You know.” 4 Again He said to me, “Prophesy to these bones, and say to them, ‘O dry bones, hear the word of the Lord!

IS IT TOO LATE FOR AN IDOLATROUS AND CO-MINGLED CHURCH?

Hosea 7
8 “Ephraim has mixed himself among the peoples;
Ephraim is a cake unturned.
9 Aliens have devoured his strength,
But he does not know it;
Yes, gray hairs are here and there on him,
Yet he does not know it.
10 And the pride of Israel testifies to his face,
But they do not return to the Lord their God,
Nor seek Him for all this.
11 “Ephraim also is like a silly dove, without sense—
They call to Egypt,
They go to Assyria.
12 Wherever they go, I will spread My net on them;
I will bring them down like birds of the air;
I will chastise them
According to what their congregation has heard.

SINNING THAT JUSTIFIES A SINNER’S SISTER?

Jeremiah 3
“6 Have you seen what backsliding Israel has done? She has gone up on every high mountain and under every green tree, and there played the harlot…. 8 Then I saw that for all the causes for which backsliding Israel had committed adultery, I had put her away and given her a certificate of divorce; yet her treacherous sister Judah did not fear, but went and played the harlot also. 9 So it came to pass, through her casual harlotry, that she defiled the land and committed adultery with stones and trees. 10 And yet for all this her treacherous sister Judah has not turned to Me with her whole heart, but in pretense,” says the Lord.”

PRAY FOR THE FAITHFUL IN GOD’S CHURCHES AND CALL LEADERS TO ACCOUNTABILITY.

No generation in the Western world has had a greater need for the Church to be devoted to the call to holiness and faithfulness as she seeks to be the Church in the midst of a crooked and perverse generation. Compromises such as Revoice movement in the name of cultural engagement or relevance are the kiss of death to a church who will be salt and light and offer the sweet fragrance of life to the world around it.

ARE WE TO BE A STENCH TO GOD IN ORDER TO APPEASE MEN?

2nd Corinthians 2:
14 Now thanks be to God who always leads us in triumph in Christ, and through us diffuses the fragrance of His knowledge in every place. 15 For we are to God the fragrance of Christ among those who are being saved and among those who are perishing. 16 To the one we are the aroma of death leading to death, and to the other the aroma of life leading to life. And who is sufficient for these things? 17 For we are not, as so many, peddling the word of God; but as of sincerity, but as from God, we speak in the sight of God in Christ.